Local time: 23.24
My service dates back to September 2005 and has since been requested by many clients in 19 countries – Thank you!

Hello there, I'm Mike Mangelsdorf. My family and I currently live in a small castle town (see photo) in Southwest-Germany, where I work as a freelance translator, mainly on software documentation. 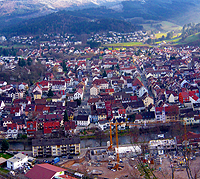 Before coming here, I worked for a small, vibrant British company in an even smaller Paris office. The company was acquired by another, and in subsequent months we managed accounts by ourselves for lack of direct supervision.
Once structure was restored, I did less translation in favour of technical support and software development.

At that stage, I had already lived in France for a few years, with a two year hiatus where I got a CELTA certificate in the UK for teaching English to adults and had moved to Japan, working as an English teacher. My main goal in Kyoto was to learn how to read Japanese, an endeavour I had started in high-school, so I spent most of the time going to language school.

Before that, I did burger flipping and translation work in the UK for a year or so, enrolled in technical translation studies and physics, went to the US during a one-year student exchange back in 1986, and then time looks a bit hazy…

If you would like to get in touch, then e-mail is an obvious choice – but perhaps you also recognize one or the other of the following portals, where I maintain profiles with additional information regarding my background.